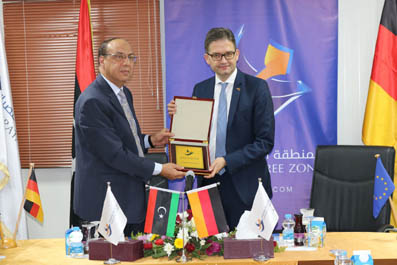 On Thursday evening, 07/02/2019, the Ambassador of the Republic of Germany to the Libyan State, Mr. Oliver Ovecha, and an accompanying delegation, visited Misurata Free Zone. The Ambassador met with the Chairman of the Board, Dr. Al-Hussein Omar bin Hamida, and the general managers and directors of departments. The Chairman of the Board of Directors opened the meeting welcoming the Ambassador and the accompanying delegation and calling on businessmen from the German Republic to invest in Misurata Free Zone in the commercial, service and industrial fields. The Director of the General Administration of Investment also provided a full account of the strategic plan and future projects of Misurata Free Zone planned in order to raise the Libyan national economy. For his part, the Ambassador expressed his admiration for the future vision of Misurata Free Zone represented by the Libya Gateway to Africa project. He stressed his country’s desire to achieve the greatest possible cooperation at the economic level in Libya, in general, and in the city of Misurata, in particular, by means of a meeting expected in the near future between businessmen from Germany and Misurata Free Zone.