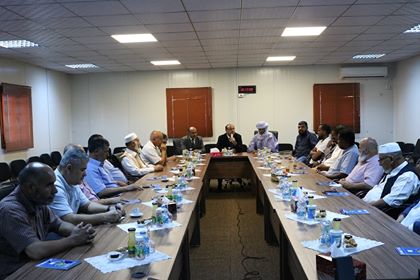 On Thursday (October 18, 2018), a meeting was held at the headquarters of the administration of Misurata Free Zone between a delegation from the city of Ghat a counterpart from the city of Misurata. The delegation from Ghat included the Municipal Council, the Social Council of the Tuareg tribes and civil society institutions in the city. On the other side, there were members of Misurata Municipal Council and the Council of Notables and Elders. The meeting was in the presence of the Chairman of the Board of Directors and the general managers of Misurata Free Zone.  In the meeting, there was a presentation of the future vision of Misurata Free Zone for the transit trade project, as well as the potential to establish a free zone in the city of Ghat in cooperation with Misurata Free Zone. This is in order to promote the work of free zones in various Libyan cities and transit trade between northern and southern Libya, and moving on to neighboring countries to make “Libya the gateway to Africa.”