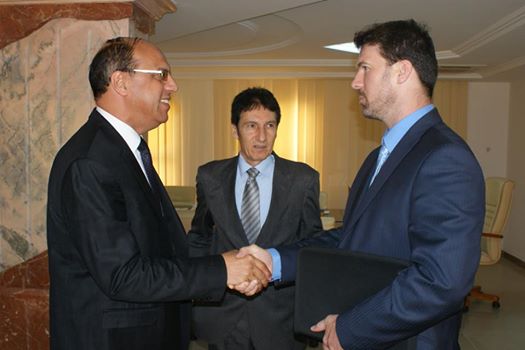 His Excellency the Czech Ambassador to Libya and an accompanying delegation visited Misurata Free Zone on Wednesday morning, 18/6/2014. The distinguished guests were received by some members of the Free Zone Administration, headed by the Chairman and General Director of Misurata Free Zone.

At the beginning, the Chairman of the Board of Directors welcomed the Czech Ambassador, stressing the importance of this visit to increase and consolidate international cooperation between the two countries. He also highlighted the significance of inviting companies and businessmen to participate in building Libya and support the national economy by means of establishing investment projects in Misurata Free Zone. This is due to the investment opportunities it offers, the security and stability witnessed in this city, as well as the availability of other resources, such as Misurata International Airport, which facilitates the process of international trade. The reception also included a documentary video about the free zone, explaining the progress of work in the seaport and the ongoing investment projects in Misurata Free Zone.

For his part, the Ambassador expressed happiness on his first visit to the city of Misurata, expressing admiration for the city, especially the ongoing works in the free zone. He stressed his country’s desire to increase and consolidate international cooperation between the two countries in most economic fields, and his aspiration to have several visits by Czech companies and businessmen to Misurata Free Zone in the near future.

At the end of the visit, His Excellency the Ambassador thanked the administration of the free zone for the good reception and hospitality. The Chairman of the Board of Directors of Misurata Free Zone offered the Ambassador a gift in the form of a shield bearing the logo of Misurata Free Zone, hoping that this visit would be a starting point for further work between the two countries